PlayStation 2
Shaman King: Funbari Spirits(シャーマンキング：ふんばりスピリッツ, "Shāman kingu: Funbari Supirittsu") is a fighting game that was developed by Dimps Corporation and published by Bandai and released on PlayStation 2 in Japan in 2004.

You can play as any Shaman King character. It is like Shaman King: Power of Spirit only a little different. Radim appears in the game. You can travel to places in the game by riding in Kalim's helicopter.

the game features simple controls and plays quite like a 2D fighter despite being 3D. There is a 2 player mode, adventure story mode, mini-game mode, and a free play mode along with training mode. The game also has voices from the original anime, as well as colorful cel-shaded graphics. Akin to the prior Dimps-developed Shaman King game: Shaman King: Spirit of Shamans, Funbari Spirits use the same HP system; both characters have an SMP and an OSP bar, where the latter gauge must be completely lowered to inflict a portion of damage directly the to former gauge.

All of the main characters are present as playable characters, along with a few exclusive-to-this-game-only characters. The story also follows events almost akin to the manga. 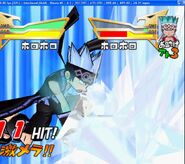