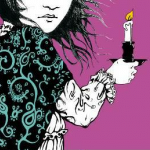 Hi, welcome to Shaman King Wiki! Thanks for your edit to the Shaman page.

did you translate it yourself, or did someone on the internet scan it, and if so i would like to know who and where to read/download it. --Gojita 14:38, February 8, 2012 (UTC)Gojita

Hello, I saw you put a picture of shaman files, on the page of sati, but they said they were prohibited, or not? because I put some of them ex: han zang ching in casual clothes, but they delete them, plus there are many in the pages of the characters and are official images of shaman king no?--Omnihallows 00:51, March 16, 2012 (UTC)

Huh... well, I checked the Shaman King Wiki:Rules page on the section regarding images. It seems when uploading Kang Zeng Bang file images, they shouldn't be uploaded in the history section of a character. Other rules include uploading images only if there is an intention to use them in an article.

It turns out the image I uploaded of Sati as a kid got moved out of the history section, so it was okay? And maybe it stayed for the same reason the pictures of Asakura Munzer Redseb and Asakura Munzer Seyram as kids stayed on their pages?

I can't really answer anything else, so I would suggest reading the rules page for any clarification it can offer. If that doesn't help, you should leave a message on User:Gojita's talk page, because Gojita is the wiki's administrator.
Eikakou 04:36, March 16, 2012 (UTC)

I would say that really depends. If its only a rough translation in the viz then screw it in favor of, lets say how the english anime called the Futunomitama no Turugi antiquity or how chocoloves name was changed to joco. --Gojita 11:27, March 17, 2012 (UTC)Gojita

What the hell? Edit

Sorry for my language, but what the hell have you been smoking? Don't go and make such a major change on a whim, it just took me over an hour to undo all of your work. I am actually contemplating absusing my position and give you a "timeout" to sooth my anger. Next time, ASK AND DISCUSS FIRST! before you do such a major overhaul, the extras might come in handy at some point, such as the possibility of a new anime, where there might be new jva's and eva's. --Gojita 14:06, March 23, 2012 (UTC)Gojita

seeing how the series is going to be picked up again this spring, i don't intend to change any of those details just yet seeing how Takei might give some whole new information that might affect how the infobox is sorting thr various information. Also seeing how we don't got an "edit bot" it would be tedious to start changing all of that in person again, despite your offer, so please leave it be until further notice :) --Gojita 03:05, March 24, 2012 (UTC)Gojita

Will you edit the pages of Rutherford, Anna the third and Silva? Looks like you've already read chapter five and know that Rutherford isn't Anna's mother.

yeah you are making a real mess, and I don't like it. that I make a new color.and you mess my colorbar up. and its not doing nothing, just putting black text over stone gray yellow. I like it, how it is. same with pink and cherry light pink. so leave it alone, you don't get ideas like I do, see you Eliskuya2 (talk) 20:50, April 8, 2013 (UTC)

no, pof203, it dose not belong there. it well get deleted, just like the rest of characters that ended up like that, so no. bare in mind, just keep it on your page, for safe keeping,plus come talk to me if you want some pointers Eliskuya2 (talk) 01:57, June 11, 2014 (UTC)

when I mean "pointer", it means, I can teach you how to use this place the right way, that's why I am going teach you how to place things in the right way, in a nice way, that's why I invited you at my page, come to think of it, think it over at night :P and like the boss Gojita said, we don't post random anime counterparts of the manga series, if I remember right, so doing you a favor, so think it over at night Eliskuya2 (talk) 02:23, June 11, 2014 (UTC)

Um... given this is my talk page, would either of you mind clarifying what's going on here? I'm not really sure what's going on. Have I done something? I don't recall doing anything to any picture in particular. Eikakou (talk) 06:06, June 11, 2014 (UTC)

he had the wrong name, it happens a lot of times,just ignore and I am trying welcome rookies around here, while me and sanchez are sill working on eps, I wish you can help out, but hey its hard work for us, but mind landing a hand or two, for us. it well be great if you helped out for us, let me know if you want help out. Eliskuya2 (talk) 08:07, June 11, 2014 (UTC)

Re:Fight between two users on my talk page? Edit

Retrieved from "https://shamanking.fandom.com/wiki/User_talk:Eikakou?oldid=34946"
Community content is available under CC-BY-SA unless otherwise noted.