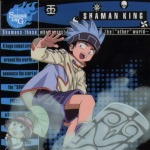 Hi, welcome to Shaman King Wiki! Thanks for your edit to the Usui Horokeu page.

The categories Manga & Anime are not very specific and if anything, the Anime Character category already exist, but only to sort out the characters that only appear in the anime, so please stop adding them. --Gojita (talk) 19:09, March 5, 2015 (UTC)Gojita

because its yourself. Just gone through some of your edits, it would seem you have ignored my first message about random categories, but not only that, now you also use Dub terminology for a whole new category, a clear violation of one of the main rules of this wikia. Consider this message your first official warning. --Gojita (talk) 20:06, March 11, 2015 (UTC)Gojita

Sorry, I don´t even now what Dub terminology is...^^" I have made a new side with all the Furyoku stats but that´s not what you mean is it? But this links are right, I know that. And please stop to delete my edits. thanks. A page, where all the Furyoku levels in a list are is helpful to some users so please don´t delete that. I really don´t know what the problem at my page was. Usui12 (talk) 06:53, March 12, 2015 (UTC)Usui12

"Dub terminology" refers to the terms used by the dubbed (probably English) version of the Shaman King anime. For example, the Japanese name for the stone sword artifact Yoh uses as a second medium is called the "Futsunomitama no Tsurugi". The English dub of the anime called the same item the "Antiquity" instead; the English version of the manga translated it as the "Futsunomitama Sword" (tsurugi means sword). So the dub terminology in this example would be if you used "Antiquity" when the policy in the wiki would be to use "Futsunomitama no Tsurugi". 209.53.181.114 00:24, March 24, 2015 (UTC)

Ahhh okay. thanks for the explaining. Now I´m wiser than before and sorry this won´t happen again^^".

WHAT! are you working at with those articles, not only are you adding a low quality image, but also completely random images with no sense of order or anything????? --Gojita (talk) 06:36, March 17, 2015 (UTC)Gojita

ARE you beyond reasoning??? I have earlier made notice of how you are adding the manga category and how it is too random and you accepted it. But you kept doing it, and I overlooked it. But now, you are starting all over. This is your final warning! Keep doing it and I will bann you. --Gojita (talk) 22:08, March 27, 2015 (UTC)Gojita '

I don´t see that this is wrong. But... you don´t wanna accept that your informations are wrong too. Anna is not the wife of Yoh Asakura. It´s Tamao. That you can read in the 32th Manga at after the end. And that you delete my Furyoku list is unfair too. Why it is so negative that there is another page? It was not an offensive article.

Are you dense? I have never ever, argued with you about who the wife of Yoh is, I have pointed out that you are adding irrelevant categories to the articles. --Gojita (talk) 13:40, March 29, 2015 (UTC)Gojita

I want to add to Gojita's comments and hopefully provide you with some clarification.

In addition to the Shaman File indicating that Anna is Yoh's wife, the final chapter(s) of volume 32 where Yoh's son, Asakura Hana calls Tamamura Tamao "mom" is because Hana doesn't know that Tamao isn't actually his mom. She has been his primary caretaker while Yoh and Anna are away for unknown reasons, so he doesn't know any other parent aside from her. Tamao actually mentions that she's going to tell Hana soon that she isn't his actual mother.

In the last chapter of the series (the Kang Zeng Bang edition with the complete ending), Hana has been told that Yoh and Anna are his parents. The Kang Zeng Bang chapters can be found in English here: http://mankin-trad.net/shaman-king/kang-zeng-bang/. They are part of the "true" ending that Hiroyuki Takei was unable to publish during the serialization of Shaman King in Shonen Jump. The last chapter, chapter 300, shows Hana meeting his real parents for the first time (http://mankin-trad.net/shaman-king/kang-zeng-bang/kzb-chapter-300).

I can´t read it because it´s Japanese... you can read Japanese?*^*

Have a looksy at the text to the right of the number, aside from the Kanji, there is also a plain english text where it says Asakura Anna. Also, please sign your post :) --Gojita (talk) 14:57, March 31, 2015 (UTC)Gojita

However, this is not the intended use for the category. Please understand that the purpose of the "Manga" category is for articles where the content is related to Shaman King the manga as a published work, something that you are reading. For example, Shaman King Zero the manga series would qualify to have this category or a page that summarizes a chapter of the Shaman King manga. But a character that only appears in the manga would not qualify to be categorized under "Manga."

Think of it this way: the category should only be used if the article is about something that you could be reading as a book or is related to the creation of that book (such as an article about the author or an illustrator or publisher). It is not to be used for something that is the content of the book (like a character or location or event).

If you're still not certain, it's probably better to double check with Gojita before adding the category to so many pages.

Retrieved from "https://shamanking.fandom.com/wiki/User_talk:Usui12?oldid=38462"
Community content is available under CC-BY-SA unless otherwise noted.