The Armory is located on the lower levels of the Cargo Ship X and contains various munitions ranging from guns, riffles to rocket launchers and explosives. Before being expelled, Hans Reiheit was the weapons keeper of the X-Laws.[1] Azazel was kept in storage and Zelel was tied up in the armory, until Zelel was given to Lyserg Diethel and Hans Reiheit took Azazel.

The armory also houses the weapons used as mediums for the Archangels and Fallen Angels. Each firearm is called sword and engraved with the serial number "Sword No" and numbers going from 000 to 009. The members each have their own personal firearm that is named, using a combination of their own name and the name of the firearm. 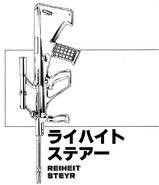 The Hand Illumination Grenade-X or just Grenade-X, is a modified hand grenade. Chris Venstar carries one in a fireproof pack within his shoulder armor. As explained by Marco Lasso it is five times more powerful than a regular hand grenade and a single one of them was able to burn away all the oxygen in the arena used in the second round of the Shaman Fights.[2]

The armory or the fact that the X-Laws had more firearms than the ones they wielded personally was never shown or mentioned in the anime series, except for Chris Venstar's used of the Grenade-X.[3]